During our trip to Rhodes Greece we stayed at the Capsis Hotel. We chose the Capsis due to the price deal of it’s all inclusive. There were a few negative comments on Trip Advisor but many positive ones. Some negative about the ability of the Hotel to control the wind and other forces of nature. The other was the requirement for its already vast menu to include burgers and chicken nuggets. If you want chicken nuggets why bother going abroad? 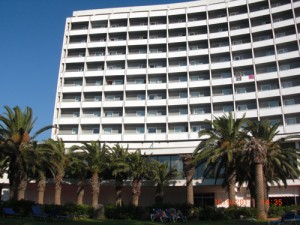 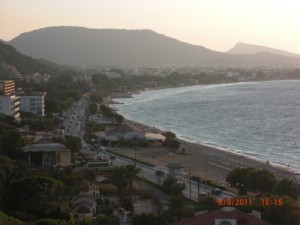 View of Coast from Hotel Balcony 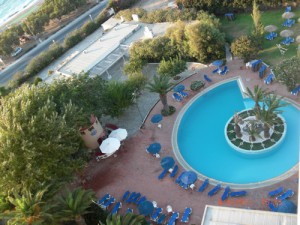 View of Pool from Hotel Room

The truth is that Rhodes is a very nice place to spend a week. The locals are polite and courteous. The cost of drink and food etc is not excessive. Rhodes Centre consists of the new and old town. The shopping is not that great in either. The old town is within a walled fortress with narrow streets and lots of tourist shops and eating places. It’s definitely worth a trip. The port is nearby with some amazing cruise ships and some even more amazing private boats. 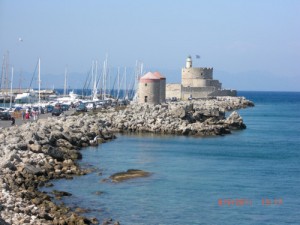 The all inclusive deal at the Capsis Hotel is amazing. There are a few minor issues with the hotel. The elevators are a bit slow and unpredictable, button lights are permanently on or don’t come on at all. Some don’t go to the eighth floor. This was reported to reception but was there for a week and nothing was done.

Very noisy at night with wedding receptions with music playing into the small hours of the morning. There are a couple of main pools on both sides of the hotel, one evening we had a wedding reception around one pool and a gala dinner with very loud techo music around the other. I am not one to restrict the income of a nice hotel but maybe a restriction to the times these finish to midnight rather than 2am plus. We are after all there for a rest and waking up with bags under our eyes is not great.

The rooms of the hotel are a little tired and in need of renovation. Our room in particular had quite thin walls and although our neighbours in the room were not excessively noisy we could hear everything that was said. The doors have still have a physical key and no internal lock and no security safe in the room. Although separate safety deposit boxes were supplied at an exorbitant cost €18 Euros for 24 hours as was the Wi-Fi internet connection at €20. There are some computers in the huge lobby available to use at €1 per 12 minutes. TV was a joke. 5-6 channels most of them Greek, the only English speaking channel was BBC world news. With satellite TV nowadays there is no excuse to have such poor service. I think they are also missing a trick by not having a pay TV service where you can watch a film if you want to. The hotel was not very close to any facilities either.

That was the negative points out of the way. The positive points were also numerous. The food variation is probably the best I’ve seen at breakfast, lunch and dinner. The endless supplies of food and drink are amazing. The sea is just across the road. They even have a tunnel/underpass to prevent you crossing the road. Although dated the hotel is very clean and the staff do a great job at keeping it so even with the odd inconsiderate of guests.

There is a bar in the main lobby. I have never seen bar staff work as hard with the endless supply of all inclusive drinks. I have seen the bar staff take several different orders from several different people and serve them all at once. I’d say the hardest workers in the hotel Amazing. There are a further two bars There is an ‘Animation Crew’ which put on events and try to keep the guests entertained. Not my scene but if you want to get involved there is that option.

It’s worth checking with your representative to book any excursions early as these get booked up really early. We did however manage to book a Greek Night excursion which included the coach transport to just outside Falaraki to a Greek Taverna. We were then treated to a quite a small meze by Greek and/or Cypriot standards but it did include all the wine you can drink, beer was extra. The entertainment was good and included a female singer playing the synthesiser and a man playing the bouzouki and several traditionally dressed Greek Dancers. The dancing was good with a lot of audience participation. This treat was €35 each. Which I think represents good value for what you got. 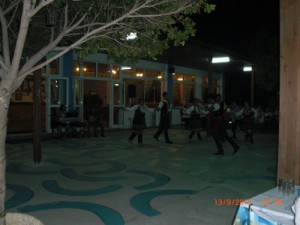 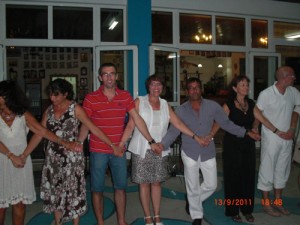 The only problem with all inclusive holidays it tends to make you less adventurous about eating out and experiencing the local entertainment. We ventured out to a local bar nearby called The Surf Bar. They had a rock band playing called The Time Machine who incidentally were amazing and well worth our venture out. 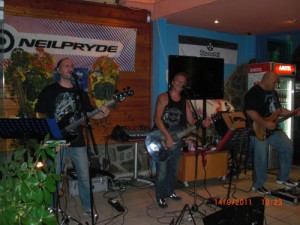 The Band Time Machine playing at The Surf Bar

The only downer of the whole trip was the journey from and back to the UK with RyanAir. Since writing this I have travelled to other places with RyanAir and they have shown to be improving with the acceptance of a carry-on bag in addition to the carry-on luggage, coupled with prbooked seats they have started to appear almost normal.

We will definitely visit Greece again but will visit other islands.